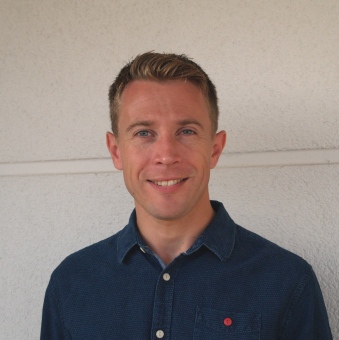 Dr. Scott G. Mitchell is a Tenured Senior Scientist at the Aragón Materials Science Institute (ICMA) in Zaragoza (Spain). The ICMA is a mixed research institute between the Consejo Superior de Investigaciones Científicas (CSIC) and the Universidad de Zaragoza (UNIZAR).

He graduated from The University of Glasgow (U.K.) in 2005 with an M.Sci.(Hons) in Chemistry and Medicinal Chemistry with a European Placement, carried out at Charles University, Prague (Czech Republic) under the supervision of the charismatic and talented Prof. Martin Kotora. After a short spell working on sausage casings in Devro Plc he returned to The University of Glasgow and obtained a Ph.D. in 2010 under the supervision of Prof. Lee Cronin and Dr Nick Hazel of BP Chemicals (Hull). His doctoral research focussed on the self-assembly of polyoxometalate (POM) framework materials and he continued to work with POMs as a postdoc in The Cronin Group from 2010-2011, but this time investigating the combination of Density Functional Theory and Mass Spectrometry to better understand the self-assembly of metal-oxide clusters.

He was awarded a Juan de la Cierva Fellowship from the Spanish Ministry of Science to work as part of the Nanotechnology and Apoptosis Group headed by Dr Jesús Martínez de la Fuente at the Institute of Nanoscience of Aragón in Zaragoza (Spain) from 2011-2013. During this period he investigated the synthesis and application of plasmonic nanoparticles as photothermal therapy agents for potential anti-cancer applications. Then from 2013-2015 he held a Marie Curie Intra-European Fellowship (once again with Jesús M. de la Fuente) investigating ‘The Complimentary Combination of Polyoxometalates and Metal Nanoparticles’ (COCOPOPS) at the University of Zaragoza. He obtained a highly competitive three-year ComFuturo Project from the Fundación General CSIC whereupon he joined the Aragón Materials Science Institute (ICMA-CSIC) in Zaragoza from 2015-2018.

His current academic interests involve synthesising modular (more often than not) hybrid materials which possess properties that can be fine-tuned and harnessed for a variety of applications in heritage science, biotechnology and catalysis. Scott carries out independent research within the BioNanoSurf Group lead by Prof. Jesús Martinez de la Fuente (also ICMA-CSIC/UNIZAR).

Scott is keenly aware of the importance of exposure to science at an early age. He is involved in designing and presenting programs to help children understand science and, more importantly, get excited about it.

Hobbies: Hailing from the dreich central belt of Scotland, it’s perhaps no surprise that in his spare time here in Spain he tries to make the most of the Spanish way of life by eating and drinking the amazing local produce with friends and family. The mountain running scene here is also fantastic so he does enjoy hoofing up and down hills as a perfect catalyst to get outside and explore the Spanish Pyrenees with his wonderful family as often as possible.